Ukrainian entrepreneur Evgeniy Sarantsov covers a wide range of questions related to the startup launch. He founded a platform for commercial and public bidding zakupki-online.com, which in 2015 became a part of the platform zakupki.prom.ua with a $124 million turnaround. The expert provides advice on how to analyse the hypotheses, assess the risks and define how much money to invest in the project with an undefined future outcome.

Why am I talking about financial risks? Because there was a time when I also had been investing in the projects and lost some of the money, around $500,000 back then. Only recently I have realised what the problem was.

The projects of the future: what to risk for?

It all started with space. In the middle of 20th century in the US, there was created an agency specialised on defence technologies, called DARPA. Their goal was to explore the space, but they also invented Internet and GPS on the side.

Risk management instruments, however, only started to be used in the 60s. And so it happens that the story of DARPA is the story of how 2 best global technologies were invented without any risk analysis whatsoever.

The first thought that I would like to convey to you is that risk management does not work for crazy projects.

There are 3 ways to get the knowledge about the world:

When we talk about the venture capital business — it often deviates from the scientific approach, founders usually just want and know. It is important to make sure that whilst reading about different analysis instruments, this “I want and I know” doesn’t disappear, and remains the main stimulus.

More risk! It’s not about the space travel itself, but about the fact that revolutionary technologies were invented because of it. Even if you don't really care whether men flew to the Moon or not, it is worth remembering that Internet and GPS are both the byproducts of that travel.

How much would you invest in Columbus?

Imagine October, 1492.  Christopher Columbus disembarked at the New World. He was using a somehow strange map, which was not anywhere near perfect. What were his chances to get to his destination? That’s right, they were very little. This is about risk management.

The new requires sacrifice and risk. If we are dealing with the projects of the future - we need to risk. Because at the end there will be a new October and a new Columbus will step onto a “New World”.

The definition of a “risk”

Risks are uncertainty that arises because of the lack of information. When we talk about the risks of new projects - we never have enough data to predict that it will go this way or another.

At the same time, the lack of information is an integral part of any business process and project at launch or early development stages.

According to Professor Amar Bhide (“Origin and Evolution of New Business”), 93% of all companies that ultimately become successful had to abandon their original strategy because the original plan proved not to be viable.

It is natural that you don’t know what will happen in the future; when you are asked “How much will your startup earn?” or “How will the hypothesis be realised?”. But we must assume different scenarios of further development.

The model of launching a company (Steve Blank and Bob Dorf)

I took this model from the book “The Startup Owner's Manual.The Step-By-Step Guide for Building a Great Company”.

Below is the type of model that the authors suggest:

At the first stage, you need to identify the customers and draw a red line. Authors call it the “stop sign” where you decide whether to give up your idea, pick up another hypothesis or move forward. You make a decision after you understand who your customers are.

The second step is validation. Test your customers from the check point of view or, in other words, understand whether they will pay money. Now you need to draw a red line again. Decide, whether you are turning back or moving forward.

Only after that you can start expanding your customer base and make a decision whether to build a company. This is a path with turns.

Pivot (or rejecting a particular hypothesis) is not a failure, as the hypothesis is just a fancy word for “guess”.

A great example of the “pivot” is the radical change of the business model of ThePoint, a website where people used to organise joint actions. When the founders started to run out of money, they analysed the numbers and realised that what united people the most was shopping. Users were saving money by making group orders. This is how Groupon’s business model was created. A few years later the business was valued at $12 billion.

A Real Options Valuation is another model to always have in mind. It is commonly used by large companies and venture capital funds. The word “options” in this model refers to the rights rather than obligations. 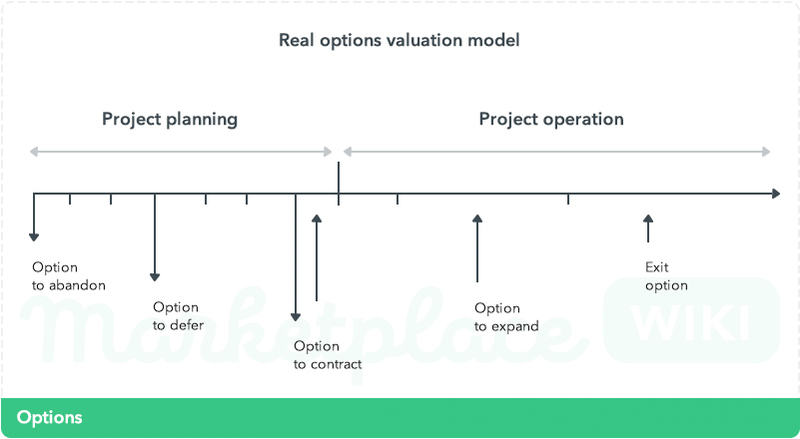 According to the model, the project can be divided into two phases: project planning and operation.

The project planning includes 3 options: to abandon, to defer and to contract.

1. Option to abandon means to stop the project or to change the business model (to make a pivot).

A pivot is completely normal. You try the project on as a suit to see if it fits. This is what the design stage is all about.

2. Option to defer (is also referred to as termination). You join the market when it is ready for your innovation. If you see that it isn’t the time yet, you put it on hold. In many cases the right timing is the key to success for a startup.

3. Option to contract. Before you start spending the budget you have the right to cut it down. You decide whether you need to have 3 or 5 people in the team. You will not be able to say “no” to these people later. As soon as you start operational activities, you lose this right, because to “cut down” now means to make 30% of people redundant, to give up the office, to outsource accounting and so on.

When the startup is in your pocket, it is important to remember that you have 3 rights at the design stage: to abandon, to defer and to contract. You lose them as soon as you launch the business.

Project operation includes 2 options: to expand and to put (or to sell).

1. Option to expand — уou have 30 people working for you and you decide to hire 60. But as soon as you downsize to 15, it flags that you will most probably soon shut the company down. You have the right to expand but not to shrink. You had to do it before starting the operational activities.

2. Exit option (put option) — when you close the business down or sell it.

It is very important to feel the line between the planning stage and the start of operational activities. From my personal experience: when I decided to become an entrepreneur, I was a successful TOP-manager and I had a start up capital. To launch our new project we rented a 2-floors building, hired people and two years later we had no money left. And when we launched the first products, no one was interested in buying them. The mistake was that we hadn’t used our options on time, although they could protect us from risks.

“No business plan survives first contact with customers, so use a flexible business model.”

“Make sure decisions are fact-based, not faith-based.”

How to plan financial flows

There are 3 models of planning the strategy:

The more options you put into the model, the more risks you take into consideration. I am going to talk about the instruments further.

DCF-analysis used to be a common method to investigate financial flows. However, it has considerable flaws. It is a linear model which includes the following indexes: 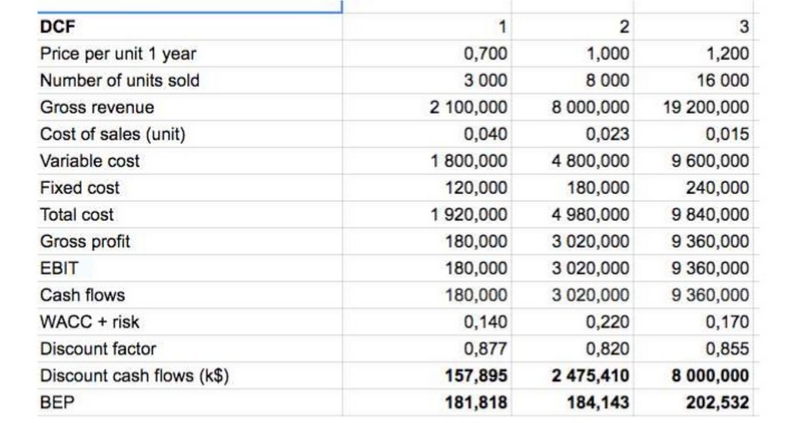 Maximum, that you can achieve with this analysis method is to include the risks, to discount the earnings (to reduce the amount). You can say: we are planning a revenue of $180,000 but considering the risk (or discount factor), it can be $157,000.

In my opinion, DCF-analysis is not suitable for the projects of the future, such as Columbus case. It doesn’t work for a rapidly changing market.

I suggest we look at few other models.

Here is an example of a binomial tree. You want to launch a marketplace and so you have 2 options: to launch or not to launch. If you decide to go for it, you will have 2 more options, and so on their amount will increase respectively. What the model gives you is it makes uncertainty more certain. It makes you assume more scenarios.

Dynamic business model is a separate block. It says: to build a model you need data. Don’t  make it up, only use what had been gathered empirically, or, in other words, during the contact with a real or potential client.

In this way you build a dynamic business model. It says the following: any idea about the future of the project can be based only on the empirical (or factual) experience.

Only once you gain a little experience you can build up the model and predict its growth. There is no other way to understand what will happen to the startup.

One simple way to reduce the uncertainty is to tell people about the project before the start. This way you will test the hypothesis and understand who is ready to pay for your service.

Risk assessment: the example of applying the Binomial Tree model

Here is an example of how the model can look like. 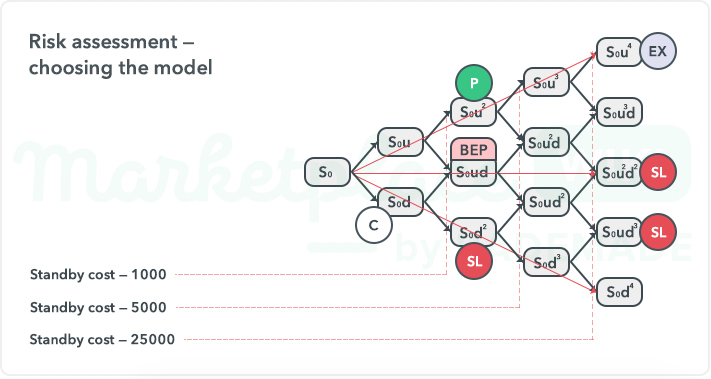 We are at the starting point, which is the stage with 3 options. Our standby cost is $1000 per quarter or per month. We assume that if there are any changes at the market we can move up or down.

From the lower point, there are 2 possible movements: we will either reach the break-even point (BEP) or stop the project (SL —  stop loss).

From the upper position there is a probability to get to the point P (profit) and start earning money. If we continue to go up — there will be an exit (E).

The intersection points can represent traffic, revenue, etc. These can be any metrics we are able to measure.

To forecast the risks I use the Oracle Crystal Ball application. Based on the entered data it generates graphics that are convenient to use.

When modelling business behaviour I don’t work with the exact parameters like in the DCF case (the revenue will be X or X+1), instead I include variables, for example:

These ranges already include the risk of unfavourable movements on the market. After this, I put the model through 1-10 thousand different scenarios and see the graph. 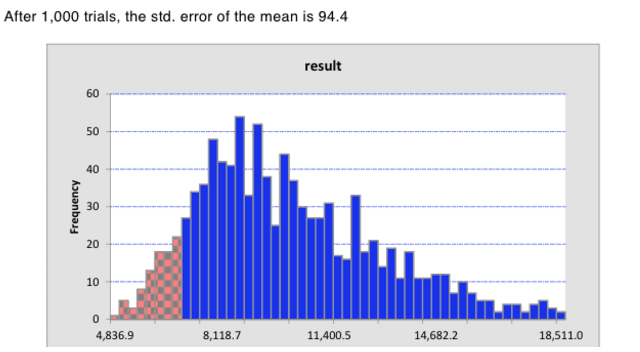 It allows me to understand what should be the conditions for the business to survive (from the extremely unfavourable to the favourable).

Think about what will help you to decide when to make a pivot. The DCF-analysis, which allows you to investigate one scenario, or the Binomial Tree that can help to analyse several ones? Or maybe the continuous modelling that can take into consideration tens of thousands of various scenarios for your business?

To conclude, when we talk about risks, we need to carefully put them through ourselves. Because let’s remember, Columbus discovered the New World. So even if there is a zero chance to succeed, and you know it — still risk it. 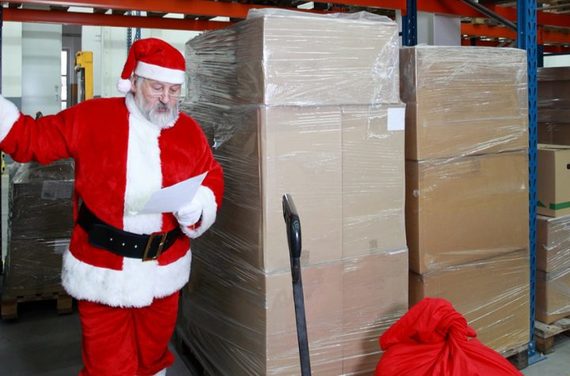 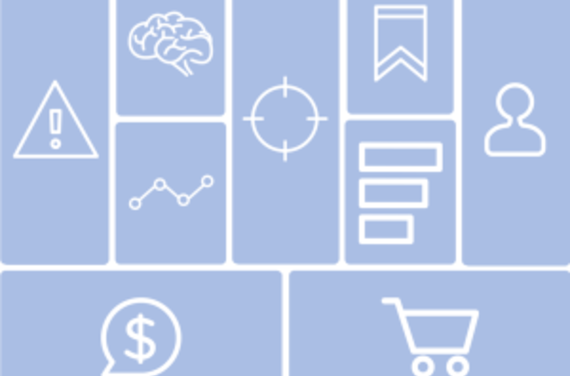 Business modelHow to fill the Lean Canvas in